An archeology and history-themed cruise with an Expert Guest Lecturer

A cruise voyage unraveling the world famous Corinth Canal and the most important monuments and historic sites of Greece.

A voyage through history dedicated to the Golden Age of Greek civilization and beyond, this cruise comes complete with a guest lecturer, Eugenia Alexiou. Eugenia has a Master’s degree in Byzantine Art, is an expert historian and, as a graduate of the Athens’ Tour Guide Academy, is the perfect tutor through all the classical sites and sights we visit. This journey to off-the-beaten track locales in the Peloponnese peninsula is a masterclass on the journey through classical antiquity and the Roman conquest, ending with the transition to the Christian empire of Byzantium. Transit the amazing engineering feat that is the Corinth Canal, cut though solid rock in the 1880’s to join the Gulf of Corinth with the Aegean Sea.

M/S GALILEO, MOTOR SAILER
The 48 meter M/S Galileo is a classic steel hull motor sailer, with spacious and well appointed interiors renovated in 2016.
GENERAL INFORMATION:
Length: 48 m (157 ft)
Launched:1997 |Rebuilt:2007 |Renovated: 2016
Cabins: 24
Capacity: 49 passengers
Crew: 16-18
The M/S Galileo, built with the most stringent safety regulations, was launched in 1992 and was fully rebuilt in 2007. The latest renovation works of the M/S Galileo took place between November 2015 and March 2016 and included significant upgrading of the guest accommodations as well as the indoor & outdoor public areas.
The elegant Galileo has operated cruises in the Mediterranean Sea and the Indian Ocean. The Galileo is always sailing under motors. Sails are occasionally used when weather and route allow
Service on board is provided by your Captain, the Cruise Coordinator and your experienced Marine and Hotel crew members.
CABIN SPECIFICATIONS:
The Galileo’s 24 outside guest cabins are located on Upper and Lower Decks, all with large portholes. Elegantly decorated, they have either twin or double sized beds and bathrooms with showers en suite. Category B cabins have flexible bedding arrangement. All cabins are comfortably arranged and beautifully furnished with wooden furniture and light fabrics. Cabins have individually controlled A/C, offer storage space, and are fitted with flat-screen TVs, mini fridge, telephone (for internal use), hairdryers, central music, public address system and safe boxes.
LIFE ON BOARD
During the day, life on board centers around the indoor lounge area and dining room, as well as the outdoor areas at the Main, Upper and Sun decks. The Captain will drop anchor at secluded bays and beautiful uninhabited islands where , weather permitting, guests enjoy swimming, snorkeling, kayaking.
MAIN DECK LOUNGE & DINING ROOM
Renovated in 2016, the main deck lounge area with an American bar leads into a warm and elegant dining room finished with wood and carpet flooring, and beautiful soft fabrics. The spacious dining room seats all passengers in a single, unassigned seating and allows for spectacular views around you, while dining in an elegant environment. Food is served at the table or displayed on the state of the art hot & cold buffet which also includes a “a la minute cooking” section.
UPPER DECK OUTDOOR LOUNGE AREA
Guests on Galileo very much enjoy the shaded outdoor area with an outdoor bar where they can relax enjoying the most breathtaking sea views.
SUN DECK
The vessel features a Sun Deck with a sitting area to relax and enjoy unobstructed views and with ample Sun loungers’ space to sunbathe under the Mediterranean sun.  In the evening you can watch the sunset, enjoy a drink overlooking the stars. Guests on the Galileo enjoy the shaded outdoor Bar area at the Upper Deck as well as the Sun Deck. 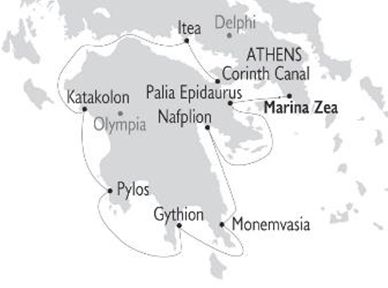 Itineraries can be changed at the discretion of Cruise Company and of the Vessel's Captain in case of adverse weather conditions - winds of 6/7 beaufort or more depending
on the vessel- on port authorities not allowing a vessel to leave port or in case of other extraordinary conditions. Such itinerary changes do not entitle automatically
passengers to any refunds but Variety Cruises guarantees that passengers are disembarked at the advertised port of disembarkation on time for their flights.