This Greece self drive holiday package combines Athens and the cities of Nafplion, Olympia, Delphi and Meteora. 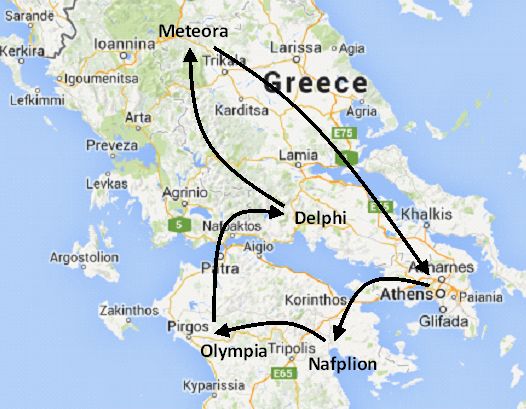 DAY 1. ATHENS
Upon arrival, you will be met and transferred to your hotel. Balance of day at leisure.
DAY 2. MORNING ATHENS GUIDED CITY TOUR
The striking contrast between breathtaking monuments of a glorious past and modern elegant structures is what you will enjoy during your tour of Athens. Visit the Acropolis,the crowning beauty and glory of Ancient Athens, with its many monuments atop its rocky base, including the awesome Parthenon, the Propylea, the temple of Athena Nike and the Erechtheion, with its Porch of Maidens. Drive to the Roman Temple of Olympic Zeus, the Panathinaikon Stadium(site of the first modern Olympic Games in 1896), the Tomb of the unknown Soldier in front of the Parliament House on Constitution  Square. See views of government buildings and elegant structures of the 19th century. Drive along Panepistimiou Avenue and view the Catholic Cathedral, the Academy, University, National Library. In contrast,  conclude your tour with a visit to the new Acropolis museum, a marvel of architecture with a full exhibition of the glory of Ancient Athens. Balance of day at leisure.
DAY 3: ATHENS / NAFPLION
Pick up rental car at your hotel in Athens at 9:00am. Drive to Corinth. Arrive in Corinth Canal. Stop and Visit. Drive to Ancient Corinth. Stop and visit. Drive to Mycenae. Visit. Lunch en route. Continue your drive to Epidaurus to visit the famous theatre, still in use, 14000 capacity, the best preserved ancient Greek theatre, known for its unique acoustics. Drive to Nauplia. Overnight.
DAY 4: NAFPLION / OLYMPIA
After breakfast depart for Olympia (180klms). Drive through the central Peloponnesus to Tripoli-Sparta. Visit of the old city then see Mistras. In the afternoon drive to Olympia for overnight.
DAY 5: OLYMPIA / DELPHI
After breakfast start the tour of the birthplace of the Olympic Games! Visit of the magnificent Museum housing the famous statue of Hermes by Praxitelis and the archaeological site with the temple of Zeus, temple of Hera, the Gymnasium, etc. Visit also the Old Olympic Stadium used for the Olympics of 2004! Around noon depart for Delphi via Patras. Drive along the new suspended bridge from the Peloponnesus back to mainland, through Nafpaktos and arrive in Delphi for overnight.
DAY 6: DELPHI / KALAMBAKA
Visit of Delphi in the morning. See the temple of Apollo, the theatre, the stadium, the Athenian treasury, walking along the Sacred way of Delphi. Then visit the Museum housing some masterpieces of the Greek sculpture, such as the bronze statue of the Charioteer. In the afternoon drive to Kalambaka. A small town stated at the foot of the astonishing complex of Meteora, gigantic rocks. Overnight in Kalambaka
DAY 7: METEORA / ATHENS
After breakfast, we suggest to visit two of the famous monasteries, the Great Meteoro with its Byzantine museum where treasures from the Byzantine orthodox years are kept and the Monastery of Agios Stephanos. Meteora does not only offer a sample of the Byzantine art dating from the 14th century, but yet a geological unique global phenomenon.
Afternoon return drive to Athens (340klms). Arrive at Athens in late afternoon, and drop off car at 8pm.
Overnight in Athens
DAY 8. ATHENS / AIRPORT
According to your departure flight, you will be transferred to the airport.