Greece and Turkey cruise with the Celestyal Olympia cruise ship.


Order a drink on the Hera deck, beside the Olympia’s sparkling pool, and watch the Aegean unfurl before your very eyes. Two lounges, five bars, three restaurants, fully-equipped Olympian Gym, the Sana Beauty Center, the Travel Value & Experiential Shopping Centers, the library and a Kids’ Club are always at your service. Celestyal Olympia can accommodate up to 1664 passengers in 724 cabins with en suite WC, TV, Radio and A/C.

There is no better way to cruise to the Greek Islands than with Celestyal Olympia. See below the available cruises dates:


*****  2 Excursions:
1)***** Excursions in Kusadasi (Turkey) is:  Ancient Ephesus through the Ages - Hellenistic/Roman  (Approx. 3 hours)
KUS-02: Ancient Ephesus through the Ages -Hellenistic /Roman
At Ancient Ephesus you find Immortal relics of the Hellenistic, Roman and Early Christian era. At the archaeological site you will be given a guided tour among the Agora, the Odeon, the Library of Celsus, the marble-paved main Street of Kouretes, the Baths of Scholastica, Trajan’s Fountain, the Public Latrines, the Residences of the Patricians, the Prytaneum, the Temple of Hadrian…
The Great Theatre, built in the 4th century B.C., could accommodate 24,000 spectators and it is famous even nowadays for its acoustics. The finds from the excavations, which have yet brought to light only 13% of ancient Ephesus, reside in the Archaeological Museum of Ephesus, in the city of Selcuk.
During the excursion you will have the opportunity to do some shopping such as carpets, jewelry, leather and other souvenirs.
AND
2) ***** Excursion in Rhodes (Greece) is :  Medieval tour - Acropolis of Lindos and the Citadel of the knights
RHO-01: Rhodes  – Medieval tour - Acropolis of Lindos and the Citadel of the Knights   (Approx 5hrs)
Lindos  is situated 55 km (40 miles) from the city of Rhodes and “bears” above it the Acropolis of Lindos, with the ancient Temple of Athena, built in 300 B.C.
Here and there you will come across the captains’ mansions, built between the 16th and 18th century. In the centre of the village lives and breathes the Church of the Virgin Mary (Panagia) of Lindos, with frescoes from the 15th century.
Ascend to the Acropolis of Lindos. Here lies the Temple of Athena, of Doric order, which was erected on the location of an older monument. The ancient city-state of Lindos was for many centuries the most important on the island. It reached its heyday in the 6th century B.C.
At the old city of Rhodes you will go through D’Amboise Gate to walk on the Street of the Knights. Along this street you will find the residences of the Knights, separated according to Order, which bear until today their corresponding crests. 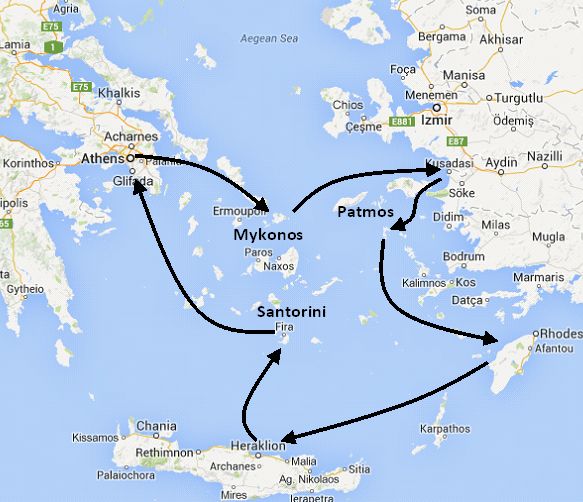 
*****  2 Excursions:
1) ***** Excursions in Syros (Greece) is:  Syros walking tour  (Half Day: Up to 4 ½ hours )
SYR-02: Walking tour in Syros
We begin with a walk of Ermoupoli centre, the picturesque capital of Syros island, where you will see the main highlights, such as Miaouli square, the Apollon Theatre and the “Vaporia” district. This will be the perfect way for you to stroll around the beautiful town, mingle with the locals and enjoy the atmosphere of the island. We visit the Church of the Dormition of the Virgin to see El Greco’s “The Dormition of the Virgin”, which was painted in the 16th century. We then walk to the Greek Orthodox Cathedral of Metamorphosis, the fi rst high school of modern Greece and now part of the Aegean University. Our tour continues on to the impressive Orthodox Cathedral of Agios Nikolaos, then to the nearby Vaporia district and “Little Venice” to see the neoclassical mansions built in the 19th century by the island’s ship owners, bankers and merchants. We walk then downhill from Vaporia to the Apollon Theatre, the first opera house of Greece and we conclude our tour of sublime Syros in the centre of Ermoupoli, at the Town Hall in the magnificent Platia Miaouli, the main square adjacent to interesting shops and atmospheric cafes.
2)***** Excursions in Kusadasi (Turkey) is:  Ancient Ephesus through the Ages - Hellenistic/Roman  (Approx. 3 hours)
KUS-02: Ancient Ephesus through the Ages -Hellenistic /Roman
At Ancient Ephesus you find Immortal relics of the Hellenistic, Roman and Early Christian era. At the archaeological site you will be given a guided tour among the Agora, the Odeon, the Library of Celsus, the marble-paved main Street of Kouretes, the Baths of Scholastica, Trajan’s Fountain, the Public Latrines, the Residences of the Patricians, the Prytaneum, the Temple of Hadrian…
The Great Theatre, built in the 4th century B.C., could accommodate 24,000 spectators and it is famous even nowadays for its acoustics. The finds from the excavations, which have yet brought to light only 13% of ancient Ephesus, reside in the Archaeological Museum of Ephesus, in the city of Selcuk.
During the excursion you will have the opportunity to do some shopping such as carpets, jewelry, leather and other souvenirs.
AND

Santorini private guided tour - 4 hours
Visually, Santorini is the most spectacular of the isles in the Cyclades. With its brilliant flooded caldera, high cliffs and charming villages, it is the Greek Isle of everyone’s dreams. Our tour will take us to Santorini’s highest peak, crowned by the Mount Profitis Ilias Monastery. At 883 feet, Mt. Profitis Ilias rugged landscape is largely composed of volcanic rocks as a result of hundreds of eruptions during the last two million years, some of them being large caldera-forming events. Here, in this remote spot, we’ll have an ideal photo opportunity to capture the beauty of this ancient island.

We’ll discover the village of Pyrgos, which was the capital of Santorini until 1800. Here we’ll be able to admire the beautiful old houses and the Venetian Fortress crowned by several churches.

Our half-day tour then takes us to one of the island’s most famous traditional wineries. Viniculture is an ancient art in Santorini, and the fact that vines thrive at all is amazing considering the fact that the island has limited water resources. But the volcanic soil is an excellent medium for producing grapes, especially the Assyrtiko grape – a rare, white variety.

After our visit, we’ll drive through the countryside to visit Oia. This traditional Greek village of whitewashed cubes is perched impossibly high on cliffs at the north west tip of the island. Here, take in the stunning views of the island from one of the charming cafés or stroll above the rooftops of the homes carved into the cliffs and gaze into the deep blue waters of the caldera far below.

From Oia village, we’ll return to the cliff top town of Fira. Our tour ends here.


Mykonos Private Island Tour - 4 hours
Mykonos - Labyrinth and Landscape... A pearl in the Aegean Sea - blue sky, beautiful snow- white houses, lovely beaches everywhere...
Starting the City-and Island tour by walking the small and narrow streets, we have many possibilities to take nice photographs in the early morning, quiet city.
We get orientation and information in the labyrinth of the old town as well as impressions of the small port and the churches in town. Of course we will see the famous wind-mills and find Petros The Pelecan, the mascot of Mykonos.
After this we are exploring the island with a bus, visiting some of the most famous beaches and the inner land- scape. We see fishermen and kaikis, small private chapels and houses built in typical cycladic style.
In the second main village of Mykonos, Ano Mera, an idyllic place 6km from town, where the guests have enough free time for a stroll around the traditional square and they can visit the monk monastery Panagia Tourliani built in the 16th century.
Next stop is Kalafatis beach were there is time to relax a little and have a coffee or a refreshment (not included in the price), before going back to town and to reach a place with a fantastic view all over the town and neigh- bour islands.
A Half-Day-Trip with a lot of impressions and useful information!
Rhodes Half Day Private Guided Lindos & Ciry excursion
The excursion includes licensed Guides and deluxe motor coaches or private air-conditioned taxis and commences with a one-hour scenic drive along the East Coast of the Island, which passes through different landscapes and many villages. At the village of Archangelos, the guests will enjoy a visit to a pottery factory, for a demonstration of handmade pottery being crafted at a Potter’s wheel. At Lindos the ‘Jewel of the Island’ with the most attractive village on Rhodes, the guests will enjoy a guided visit to the Acropolis, which includes the Great Stoa, the Temple of Athena Lindia of the 4th century BC, the ancient theatre and the few remains of the temple of Dionysus. The view from the rock of the Acropolis which rises shear 115m above the Sea is unique. The excursion continues through the picturesque medieval village, built amphitheatrically around the foot of the steep rock leading to the acropolis. The guests will see traditionally built white stone houses with their decorated pebble stone floors, many dating back to the 15th and 16th centuries, taking you back to another era. The final visit is to the 15th century medieval church dedicated to the Virgin Mary, with its octagonal dome, unusual belfry, carved iconostasis and 17th century wall paintings (guiding inside the church is not allowed).
The excursion returns to Rhodes, where the guests will disembark at the D’ Amboise Gate  and on foot enter the Medieval City to visit the Grand Master’s Palace, the most imposing building of medieval Rhodes. It was originally built in the 14th Century, but demolished by an explosion in 1856. It was restored in 1939, during the Italian occupation. The excursion continues down ‘The Street of the Knights,’ which, in spite of the restoration of its buildings, has remained untouched by the passage of 500 years, since it was originally built in the 14th century. The Gothic order predominate the entire street. The Inns of the various ‘Tongues’ stand in a row, with impressive arched