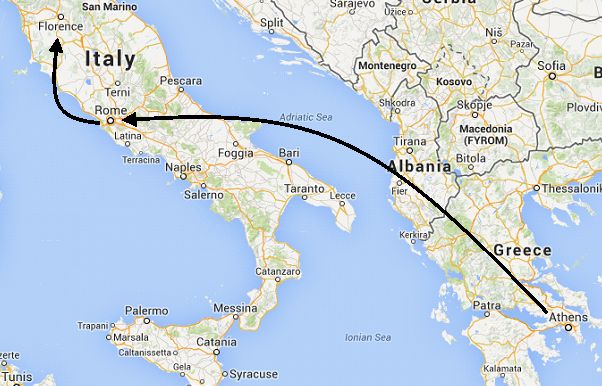 DAY 1: ATHENS
Upon arrival, you will be met and transferred to your hotel. Balance of day at leisure.
DAY 2: ATHENS CITY TOUR
Morning sightseeing tour of Athens. The striking contrast between breathtaking monuments of a glorious past and modern elegant structures is what you will enjoy during your tour of Athens. Visit the Acropolis,the crowning beauty and glory of Ancient Athens, with its many monuments atop its rocky base, including the awesome Parthenon, the Propylea, the temple of Athena Nike and the Erechtheion, with its Porch of Maidens. Drive to the Roman Temple of Olympic Zeus, the Panathinaikon Stadium(site of the first modern Olympic Games in 1896), the Tomb of the unknown Soldier in front of the Parliament House on Constitution Square. See views of government buildings and elegant structures of the 19th century. Drive along Panepistimiou Avenue and view the Catholic Cathedral, the Academy, University, National Library. In contrast, conclude your tour with a visit to the new Acropolis museum, a marvel of architecture with a full exhibition of the glory of Ancient Athens. Balance of day at leisure.
DAY 3: ATHENS
Free day to explore Athens. Athens is a city where antiquity meets edginess. Museums and galleries abound, and new ones are in the works. The New Acropolis Museum, designed by the New York-based architect Bernard Tschumi, is now open at the foot of the ancient citadel. A major makeover prior to the 2004 Olympics added squares and pedestrian walkways, and new subway stations that double as museums. Today this ancient city is a vibrant megalopolis with nonstop nightlife, creative cuisine, and sites both ancient and modern. In the thousands of sidewalk cafés, courting teenagers, young professionals, and old men shuffling their worry beads all bask in Athens’s modern-day renaissance.
DAY 4: ATHENS / ROME
At the indicated time you will be transferred to the airport for your flight to Rome. Upon your arrival on the island, transfer to your hotel.
DAY 5: ANCIENT ROME & COLOSSEUM HALF DAY  AFTERNOON WALKING  TOUR
After pick up at your hotel (in selected hotels in central Rome), you will reach the Archaeological Area with no stress, ready to get the most complete tour of the Colosseum , Roman Forum and Palatine Hill. Access the Palatine hill with no line and discover the hill where Rome was founded at the beginning. Then reach the Colosseum and be amazed by this monument that is the symbol of Rome in the world. The Amphitheater created to entertain ancient Roman citizens with bloody show s of gladiators, animals and cruel games, is now one of the most fascinating landmark of the City. Then, walk on the original path of ancient Rome along the Via Sacra and see the Temples of Vesta, Antonino and Faustina, the ancient Basilica Julia and Aemilia and dream about the glorious past of the Roman Empire. Unforgettable! DURATION OF THE TOUR: approx. 3 hours.
Pick-up, from centrally located hotels only, starts at 1:45pm with a 20 minute grace period. If you miss it, make your way to board the coach at the office located in Via Vittorio Emanuele Orlando, 95. The appointment is at 2.00pm. Tour departs at 2:30 pm.
DAY 6: ROME
Day at leisure to enjoy Rome.
An epic, monumental city, Rome gets under your skin fast.
Even on a short break, you’ll be smitten by its artistic masterpieces and iconic monuments, operatic piazzas and haunting ruins. Life is lived to the full here, and the city teems with trattorias and designer restaurants, street-side bars and glam fashion boutiques.
DAY 7: ROME / FLORENCE
At the indicated time you will be transferred to the train station for your train journey to Florence. Travel through the Umbrian hills and the Tuscan countryside. Upon arrival in Florence, transfer to your hotel.
DAY 8: FLORENCE
Spend the day exploring Florence at your leisure. We suggest admiring the Medici Chapels and Basilica di San Lorenzo before proceeding to the Piazza del Duomo to see the magnificent cathedral and Giotto’s  Bell Tower. After wandering through the medieval quarter you can cross the shop-lined Ponte Vecchio and visit the Pitti Palace. If the awe-inspiring architecture makes you hungry, make your way to the typical trattoria reserved and enjoy a  traditional Florentine lunch.
DAY 9: FLORENCE / AIRPORT
According to your departure flight, you will be transferred to the airport.

N.B. Drinks at the taverna are not included.