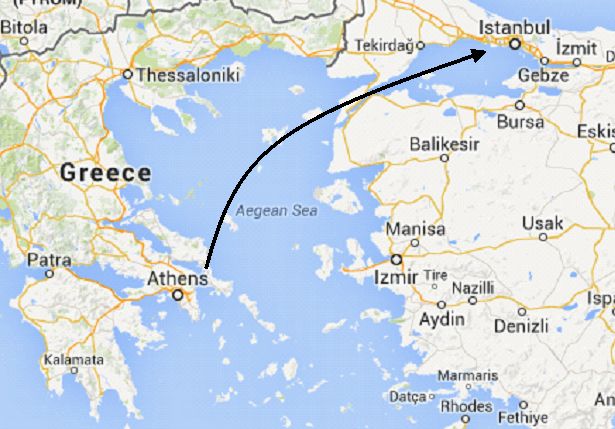 DAY 1: ARRIVAL ATHENS
Upon arrival, you will be met and transferred to your hotel. Balance of day at leisure.
DAY 2: ATHENS GUIDED CITY TOUR
Morning sightseeing tour of Athens. The striking contrast between breathtaking monuments of a glorious past and modern elegant structures is what you will enjoy during your tour of Athens. Visit the Acropolis,the crowning beauty and glory of Ancient Athens, with its many monuments atop its rocky base, including the awesome Parthenon, the Propylea, the temple of Athena Nike and the Erechtheion, with its Porch of Maidens. Drive to the Roman Temple of Olympic Zeus, the Panathinaikon Stadium(site of the first modern Olympic Games in 1896), the Tomb of the unknown Soldier in front of the Parliament House on Constitution Square. See views of government buildings and elegant structures of the 19th century. Drive along Panepistimiou Avenue and view the Catholic Cathedral, the Academy, University, National Library. In contrast, conclude your tour with a visit to the new Acropolis museum, a marvel of architecture with a full exhibition of the glory of Ancient Athens. Afternoon at leisure.
DAY 3: ATHENS
Free day to explore Athens. Athens is a city where antiquity meets edginess. Museums and galleries abound, and new ones are in the works. The New Acropolis Museum, designed by the New York-based architect Bernard Tschumi, is now open at the foot of the ancient citadel. A major makeover prior to the 2004 Olympics added squares and pedestrian walkways, and new subway stations that double as museums. Today this ancient city is a vibrant megalopolis with nonstop nightlife, creative cuisine, and sites both ancient and modern. In the thousands of sidewalk cafés, courting teenagers, young professionals, and old men shuffling their worry beads all bask in Athens’s modern-day renaissance.
DAY 4: ATHENS / ISTANBUL
At the indicated time you will be transferred to the airport for your flight to Istanbul. Upon arrival in Istanbul you will be transferred to your hotel.
DAY 5: ISTANBUL FULL DAY SIGHTSEEING TOUR
Full day sightseeing tour of Istanbul to include a visit to St.Sophia Museum (except Mondays) the Hippodrome, Topkapi Palace (except Tuesdays), Blue Mosque, Grand Bazaar (except Sundays). This comprehensive sightseeing tour of Istanbul provides the perfect introduction to the fabled city that spans Asia and Europe. On this one day sightseeing tour you will see how old meets new when you visit Istanbul's four "must-see" historic sites.
Overnight in Istanbul.
DAY 6: ISTANBUL
Free day to explore the city. Experience the comforts of modern Turkey in its malls, galleries and clubs, and the delights of traditional Turkish bazaars, palaces, taverns and mosques. Istanbul’s natural beauty, with pleasant Mediterranean climate, completes its glorious appeal. In this gleaming modern mega-city you can immerse yourself in nearly 3,000 years of history, from Roman ruins to Byzantine marvels, Ottoman treasures and modern amusements.
DAY 7: ISTANBUL / AIRPORT
According to your departure flight, you will be transferred to the airport.