Our Turkey and Eastern Mediterranean cruise itineraries can start from Istanbul and Kusadasi. Discover Turkey and the Greek isles with one of our cruise packages.
Page: 1 of 1

A long weekend escape to four of the most famous Greek islands in the Aegean Sea combined with Kusadasi (ancient Ephesus) in Turkey.

Our Iconic Cruises are like a master class in the Aegean.
The Hellenic Mediterranean, vivid and unforgettable, is our home. Let us show it to you. 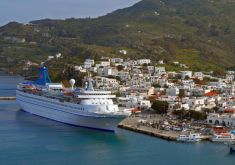