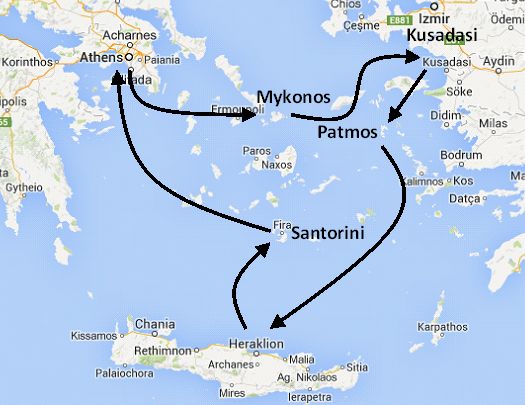 MID MARCH TO MID OCTOBER
PACΚAGE STARTS ON WEDNESDAYS OR THURSDAYS (CRUISE DEPARTS ON FRIDAYS)
DAY 1: ARRIVAL IN ATHENS
Upon arrival, you will be met and transferred to your hotel. Balance of day at leisure.
DAY 2: ATHENS / CRUISE / MYKONOS
Morning transfer to Lavrion port to embark the cruise ship for your 4 day / 3 night cruise to the Greek islands & Turkey. Cruise to Mykonos and enjoy the evening on this lively island.
DAY 3:   KUSADASI /PATMOS
MORNING IN KUSADASI (TURKEY)/ EVENING IN PATMOS ISLAND (GREECE)
The cruise ship will arrive at 07:

This is a wonderful journey through some of the most important and formative periods of history and we hope you will be enthralled by the stories of the Hellenes, Romans and of Christianity in our fascinating exploration of Ephesus. This marvellous city, sitting on the hills outside Kusadasi is a fabulous open air archaeological wonder founded by the Greeks around 2000 BC. It was one of the most important cities of the region and was dedicated to the goddess Artemis. The Temple built in her honour was one of the Seven Wonders of the Ancient World. It had more than 100 marble pillars each standing 56 feet tall and it earned the city the name ‘Servant of the Goddess.’ A single pillar remains standing on the site, found during an excavation in the 1870s. We will be able to see the Agora, Odeon, the Library of Celsus, the marvel-paved Main Street of Curetes, the Baths of Scholastica, Trajan’s Fountain, the Temple of Hadrian and the Houses of Koressus, where the wealthy families of Ancient Ephesus lived. Only 13 per cent of Ephesus has so far been uncovered. The finds from the excavations made so far are housed in the Archaeological Museum of Ephesus in the city of Selcuk.
We have time for shopping for carpets, jewellery, leather and other souvenirs at the end of our tour.
Arrive in Patmos  at 16:30 and spend the evening at leisure in Patmos (Greece). Depart around 21:30 and sail to Crete this evening.
DAY 4: MORNING IN CRETE / AFTERNOON  IN SANTORINI
Arrive early this morning in Heraklion (Crete, Greece), one of the four prefectures that constitute the island of Crete. In Heraklion you will have the opportunity to participate in a marvellous excursion to Knossos and see the ruins of the Palace of King Minos. .
***** Excursions in Heraklion:  Minoan Palace of Knossos  (Half day)
Her-02: Minoan Palace of Knossos  1st European civilization.
The ancient city of Knossos, near Crete’s capital Heraklion, was the place that ‘gave birth’ to the very fi rst civilisation of Europe, the Minoans. So we can say with some certainty it is Europe’s oldest city. Our excursion will open up the world of the Minoans as we visit one of the continent’s most important archaeological treasures. The fi rst excavations were undertaken in the 1870s by Minos Kalokairinos, a Cretan himself. A few decades later in the early 1900s, more work by Sir Arthur Evans from Britain brought to the world’s attention the full impressive scale of the Palace of Knossos, according to legend the residence of wise King Minos. We will be able to explore the large Central Court, the wonderful Throne Room, the imposing Grand Staircase and see the fresco of the ‘Prince of the Lilies.’ As you stroll through the palace apartments and view the archaeological fi nds, we think you will be just a little in awe of the rich cultural heritage of the Minoan civilisation. You will undoubtedly hear the Cretan legend of the Minotaur, half man, half bull who lived in the Labyrinth and was slain by Theseus. But that’s another story.
Exploring from room to room we will relive time in the Hall of the Royal Guard and the King’s Chamber, hearing about the extraordinary rule of King Minos
At noon, cruise to Santorini  known for its breathtaking caldera, colorful sunsets and whitewashed buildings along the sea-cliffs,  enjoy the sun, the unforgettable view and the most romantic sunset in the world. Santorini is the essence of a Greek island, where sea meets weather-beaten rock and colors are bold and elemental. Blue-domed chapels stand on hilltops; houses are simple white cubes, sunsets flamboyant orange. The half-moon island, with its rearing cliffs and dramatic outlooks, is all that remains of a huge volcanic explosion. Inland, fertile soils provide a softer landscape of silvery olive trees, fields of tomatoes and neatly pegged vineyards that produce sweet amber-colored wine.
DAY 5: PIRAEUS / ATHENS
Early morning return to Lavrion port. After breakfast on board, disembarkation and transfer to your selected hotel. Balance of the day at leisure.
Athens is a city where antiquity meets edginess. Museums and galleries abound, and new ones are in the works. The New Acropolis Museum, designed by the New York-based architect Bernard Tschumi, is now open at the foot of the ancient citadel. A major makeover prior to the 2004 Olympics added squares and pedestrian walkways, and new subway stations that double as museums. Today this ancient city is a vibrant megalopolis with nonstop nightlife, creative cuisine, and sites both ancient and modern. In the thousands of sidewalk cafés, courting teenagers, young professionals, and old men shuffling their worry beads all bask in Athens’s modern-day renaissance.
DAY 6: ATHENS GUIDED CITY TOUR
Morning sightseeing tour of Athens. The striking contrast between breathtaking monuments of a glorious past and modern elegant structures is what you will enjoy during your tour of Athens. Visit the Acropolis,the crowning beauty and glory of Ancient Athens, with its many monuments atop its rocky base, including the awesome Parthenon, the Propylea, the temple of Athena Nike and the Erechtheion, with its Porch of Maidens. Drive to the Roman Temple of Olympic Zeus, the Panathinaikon Stadium(site of the first modern Olympic Games in 1896 / short stop for photos), the Tomb of the unknown Soldier in front of the Parliament House on Constitution Square. See views of government buildings and elegant structures of the 19th century. Drive along Panepistimiou Avenue and view the Catholic Cathedral, the Academy, University, National Library. In contrast, conclude your tour with a visit to the new Acropolis museum, a marvel of architecture with a full exhibition of the glory of Ancient Athens. Afternoon at leisure.
DAY 7: ATHENS / AIRPORT
According to your departure flight, you will be transferred to the airport.